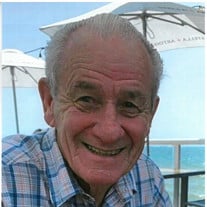 Jim Smith, age 83 of Kansas City, KS passed away on November 24, 20211 at his home in Miami, Fl. He was born February 13, 1938 to Forrest and Edrus May Smith. He joined the Air Force in 1955 at the age of 17 and made it his career until he retired in 1975. He served in Vietnam as a helicopter mechanic and was a flight engineer with the Jolly Green Giants. . Among other awards and citations he was presented with the Distinguished Flying Cross three times: 03/24/1969, 10/24/1969 and 12/10/1969. His outstanding heroism and self-less devotion to duty displayed by him reflected great credit by himself and the United States Air Force. After his retirement he moved to Miami, Fl. At the time of his death he was survived by his wife Aimee Harbin-Smith, his children Donna Smith Priest (Dick) Olathe, KS, James E. Smith Jr (Janet) of Kingwood, TX, Tamara Smith Colbert (Scott) Kansas City, KS and Terry Smith, Olathe, KS. 2 stepdaughters Rebecca McClelland (Kieran), Miami, Fl. And Rachel Ross (Matt), Marietta, GA. He was also blessed with 6 grandchildren, Kristy, Ricky, Jimmy, Kevin, Colin and Brittany. He also had 5 great-grandchildren Rylan, Jabin, Cadence, Clair and Benjamin. He was proceeded in death by his parents, and siblings George, Judy, Robert, Virginia and Margie, 2 great-granddaughters Callie and Ashlynn. He leaves behind 1 sister Karen St. John from Bucyrus, KS and sister-in-law Sherry Smith from Adamsville, TN. Jim was a fun-loving guy and a very hard worker who taught many a good work ethic. He loved to be outside and work in the yard and “putter” in his shed while he listened to country music. There wasn’t much that he could not take apart, fix it and put it back together. He was a member of the VFW, American Legion and the Moose Lodge.

The family of James E Smith Sr created this Life Tributes page to make it easy to share your memories.

Send flowers to the Smith family.