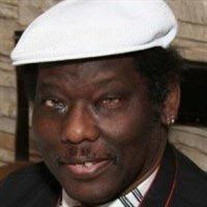 The Life Story Of Andrew Anthony Robinson Andrew came into this world on Wednesday, October 13, 1948, the child of Fred (&#8216;Twelve&#8217;) Hopkins and Clara Adell Robinson. The Robinson family was a pioneering part of the early Miami Black... View Obituary & Service Information

The family of Andrew Anthony Robinson created this Life Tributes page to make it easy to share your memories.

Andrew came into this...

Send flowers to the Robinson family.