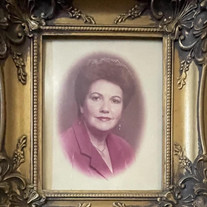 Alicia “Ali” Yanes, 86, of Miami, Florida, formerly of Havana, Cuba, passed away on February 16, 2022. She married the late Antonio “Kiki” Yanes in 1956, and they lived together in Miami almost sixty-six years. Alicia is survived by her two children: Alicia and Antonio “Tony.” Abuela Alicia is also survived by her four granddaughters: Christina, Carolina, Veronica, and Daniella and one great-granddaughter: Sophia. Though she had limited formal education, Alicia was wise and accomplished in her own right, and she worked hard to provide a good life for her children and grandchildren. Alicia was generous with her time, attention, affection, and possessions especially after she retired, and she loved to spoil her granddaughters. When she could, Alicia attended her younger granddaughters’ school events and performances so that they always had a familiar face in the audience to cheer them on and celebrate their accomplishments. Alicia loved cruises, sunflowers, music, dancing, and shopping. She loved Delicias de España and the ocean and sometimes would pick up the younger granddaughters early from preschool and sneak over for a Spanish treat or to sit by the water. Alicia liked astrology and loved listening to Mauricio Puerta. She one time spent hundreds of dollars to consult with the celebrity astrologer just to make sure her youngest granddaughter’s surgery was scheduled on a good day-from an astrological perspective. Alicia was a great cook and made the best flan and arroz con pollo. Another favored dish was garbanzos and shrimp with chorizo over white or yellow rice, a recipe the daughter-in-law and younger granddaughters learned from Alicia. Her cafe con leche was a bit thick and sweet because she added evaporated milk rather than regular milk. We could go on and on...we have so many thoughts and memories. Alicia’s health declined after she lost Kiki last year. We hope they are together again watching a Marlins baseball game or their favorite television show, Los Enamorados. Alicia, you were loved and admired, and we will always remember you.

The family of Alicia Yanes created this Life Tributes page to make it easy to share your memories.

Send flowers to the Yanes family.