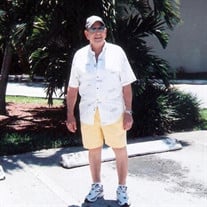 Dad was second of five children in a family of hard-working campesinos in rural Havana, Cuba. He was a police officer in Havana during the intense times of the Revolution. He told us many stories of being inspired by his inner voice, referring to it as his "little angel," who directed his steps and kept him safe through dangerous times. He credited this "little angel" for the serendipitous way he was able to escape from Cuba and reunite with his family. After leaving Cuba, he lived in Spain with his wife Gloria for a short time then, reunited with the rest of his exiled family in the U.S., including his daughter Lissette, whom they had sent out of the country with her grandmother. Living in a strange country and not knowing English, he took a job as a dishwasher, at the Americana Hotel in New York City. Although he only had a 7th grade education, he rose up the ranks quickly with his grit and determination to become one of the most sought-after Chief Executive Stewards in the New York City hotel industry. He retired from the Sheraton Center New York in the 90's and moved to Miami with his wife. Dad was loving and dedicated as much as he was tough. He was generous and helped his family, friends, and neighbors. Our mother Gloria was the love of his life, and he was completely devoted to being her caretaker for many years during her illness until she passed in 2017. Even at the end of his life, still having his blunt sense of humor, he joked about getting old and even about his impending departure from this world. He was on this planet for almost 89 years. Our father Silvino Perez Acosta passed peacefully at home on Sunday, September 19 at the age of 88, after having been in the hospital for two weeks, away from his family and friends. We are grateful that God worked it out, so he could come home for one more day to be with us before leaving this world to be with his beloved wife--our mother Gloria--and his brother German (Bebo), sister Marta, and parents Benito and Estela. He is survived by his daughters Lissette and Sandra, grandchildren Naomi and Jordan, and his nieces and nephews Adriana, Elizabeth, Odalys, Miguel, and Eduardo, and his sister Aleida.

Dad was second of five children in a family of hard-working campesinos in rural Havana, Cuba. He was a police officer in Havana during the intense times of the Revolution. He told us many stories of being inspired by his inner voice, referring... View Obituary & Service Information

The family of Silvino Perez Acosta created this Life Tributes page to make it easy to share your memories.

Dad was second of five children in a family of hard-working campesinos...