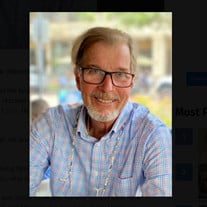 Creative. Friendly. Humble. Maverick. Renaissance Man. Ron Erbel. It is with great sadness that the family of Ronald Andrew Erbel announces his passing. Ron, a long-time resident of Key Biscayne passed away into eternal life on Saturday, April 9 at 9:11 p.m. He passed peacefully at home surrounded by love. Ron was born in Pittsburgh, PA and moved to Florida in 1960, eventually settling in Key Biscayne in 1969. Ron was blessed with a loving family. He was married to, and is survived by, his loving wife Victoria Jackson, who never left his side. He is also survived by his son Jesse Erbel and his wife Natalie Best, and grandchildren Tatiana, Elon and Malcolm; his daughter Jenny Hardison, husband Paul Hardison, and grandchildren, Lucia Lochman, Olivia and Axel; daughter Ashley Sumon, and husband Nobab Sumon, grandchildren Shiloh, Oliver and Aurora and his siblings; brother David Ralph Erbel and wife Kathlyn Erbel, sisters Lennette Ulrich and Adele Fredenburg and her husband Ron. He is preceded in death by his parents Andrew Erbel, Doris Virginia Erbel (Maiden name Galliford) and his son Joshua Erbel. Ron was first known as the “Tree Man of Key Biscayne”' when he started his landscaping business in the Key called “The Good Earth” in the early 70’s. Ron was a self-taught landscape architect and took to designing yards, much like an architect would design a building with blueprints. During that time, Ron became the Chief of the Key’s volunteer fire department. While in his 40’s. Ron attended the fire academy and joined the fledgling Key Biscayne Fire Department, where he went on to serve 26 illustrious years as a firefighter and paramedic. Ron Erbel During his firefighting career, Ron became part of the Florida Task Force 2, a special search and rescue team that was called upon when disaster struck anywhere in Florida and beyond. As part of this call of service, Ron and the Task Force, which included five Key Biscayne firefighters, were sent to New York City following the horrific events of Sept. 11, 2001 – terrorist attacks on the Twin Towers. Ron spent 17 days there, working in shifts in the rubble of the collapsed towers. Not one to sit around, Ron turned to his bees and then became known as the “Bee Man.” Along with Victoria, he enjoyed all aspects of being an apiarist, a fancy word for beekeeper. Ron kept his bees both in his backyard and on Virginia Key as part of the Key Bee Honey business. This became another reason for visitors to hang around Ron and Victoria’s lovely front porch, where you not only pick up a bottle of honey, but also chat about life and whatever else was going on at the time. In his early days on the Key, Ron and his previous wife, Sue, while busy raising the children, worked with the local Good Shepherd agency providing shelter for teenage girls in need. Ron also formed a company called Reel Medic which provided first aid response to movie sets and large events, like events at the Seaquarium, large private parties and weddings. Ron was handy and patiently restored the Fire Department’s historic fire truck – taking a year to complete the project. As if this was not enough, Ron also took – at the same time – to restoring one of Key Biscayne’s original phone booths. Both the fire truck and phone booth are on display today at the Key Biscayne firehouse on Crandon Boulevard – now serving as a tribute to Ron’s contributions. What many may not know is that Ron was also a boat captain who residents would hire to captain their boats on outings. Ron loved to fish, although he was an inpatient fisherman; if they were not biting quickly, he would lose interest. He loved the bite and action. Ron was a man of deep faith and as such, was the official Chaplain for both the Fire Department and the Save Our Sisters organization, which is an all-breast-cancer survivor dragon boat racing team. Ron was once a deacon at the Presbyterian Church, and more recently, a member of the Key Biscayne Community Church congregation. Where in the World Ron Erbel Islander News archives Ron and Victoria enjoyed adventure and traveling the world. Ron loved to meet people and learn about the culture of places they were visiting. He so much enjoyed the local food and folklore, and, for sure, always savored the local drink of choice. Remember the MacGyver TV show? Well, Ron was the Key Biscayne version of the show personified. Ron could fix anything, Victoria recalled. Ron accomplished a lot during his 70 years on earth, but out of all his businesses, work as a medic and firefighter, his main love was for God and his family. In lieu of flowers, the family requests donations be made to the Ron Erbel Scholarship Fund for the children and grandchildren of those who have been with the KBFD for 15-plus years. To learn more, click here. For donations to the Scholarship Fund, click here. Editor’s Note. This recollection of Ron Erbel’s life was conveyed to Islander News by Victoria Jackson this week. We appreciate Victoria’s courage at this difficult time, and for her time to share details of their life together. A Celebration of Life for Ron Erbel is scheduled for May 7, 2022 at 5:30 p.m. at the Key Biscayne Community Church, at 355 Glenridge Road. A reception will immediately follow the service at the Key Biscayne Beach Club, located at 685 Ocean Drive.

The family of Ronald Erbel created this Life Tributes page to make it easy to share your memories.

Send flowers to the Erbel family.