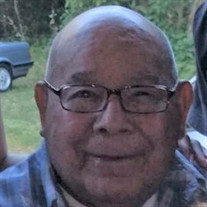 Joaquin Maradiaga, lovingly know as “Quin”, age 96, passed away on Monday, Sept 27, 2021while in hospice care in the comfort of his home in North Miami Beach, Florida.He was born in Honduras to Jose Ramon and Rosa Venancia (Ochoa) Maradiaga. Having had 6siblings, he was the last living child of that generation.He is preceded in death by his wife, Ernestina Maradiaga, and two children; son — Jose LuisMoncada, and daughter — Carmen Reynosa. He is survived by his two other daughters, NormaContreras and Yolanda (Ronald) Reddy; 9 Grandchildren, 10 Great Grandchildren, and 3 GreatGreat Grandchildren.He was born in Honduras, on August 21, 1925.There he became a dental technician through apprenticeship, working with his sister, Isabel. Hewas admired and sought for his excellent work.He was also the director of a small singing group. It was made up of himself, his 6 siblings, andtheir spouses at a church that they all attended. He had a very beautiful singing voice and a greatlove for Jesus.Once arriving to the United States in 1963, he became a cook. Eventually, he began working atthe Country Club of Coral Gables where he worked for many years, until his retirement.He loved watching Precious Memories with Bill and Gloria Gaither. But, he also really enjoyedlistening to Motown Music and Rhythm and Blues. He loved watching birds come to the yard tofeed. He also loved dogs. And, he greatly enjoyed playing pool.He had a very kind, caring, and understanding soul. He was always cheerful, and he possessed agreat sense of humor. There was a lot of love and laughter around him.He loved and constantly prayed for his entire family, until his last breath.He is dearly loved by so many family members and friends, and will be greatly missed

Joaquin Maradiaga, lovingly know as &#8220;Quin&#8221;, age 96, passed away on Monday, Sept 27, 2021while in hospice care in the comfort of his home in North Miami Beach, Florida.He was born in Honduras to Jose Ramon and Rosa Venancia (Ochoa)... View Obituary & Service Information

The family of Joaquin Maradiaga created this Life Tributes page to make it easy to share your memories.

Send flowers to the Maradiaga family.