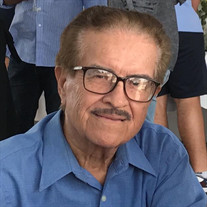 Ernesto Luciano Jimenez, 89, of San Juan, Puerto Rico died peacefully Thursday morning, March 24, 2022. He is survived by his wife of 63 years, Ivette Perez Roman, their children, grandchildren and great-grandchildren, as well as nieces, nephews, extended family and dear friends. Ernesto was born in Adjuntas, a small town in the mountains of Puerto Rico. The youngest of 8 children, he was raised by his sister Emilia, from whom he learned a strong work ethic, an unwavering sense of responsibility and a capacity to care for others that never left him, even in his last years of life. In the ’50s, Ernesto, recently discharged from the Army having served in the Korean Conflict, went to a dance. That’s where he met Ivette. A 2018 newspaper article featuring their experience during Hurricane Maria says it best: “I looked at her and I noticed she wasn’t from Adjuntas. She was visiting. So when the music started, I went right to her and said ‘Would you like to dance with me?’ and she said ‘Oh, I’m sorry, no, no.’ I kept talking to my friends and said I have to dance with that girl.” Ivette, he said, was beautiful. “I went again and on the fifth time she accepted to dance with me and that was the beginning of 59 years we have been together.” They married in 1958 and were one month shy of their 64th wedding anniversary at the time of his passing. Following his graduation from the University of Puerto Rico, Ernesto worked for Luis Acosta Inc., a food and liquor wholesaler in Puerto Rico, eventually becoming vice president of the company. After several years, he bought various wholesale food and liquor companies and continued in the business until he retired. Ernesto was a keen businessman with a brilliant mind and quick wit. Honest and assertive, he was highly successful and well-regarded in Puerto Rico’s food industry. As a devoted follower of Christ, Ernesto was an active member of Iglesia Evangelica Ministerio Sanador, under the leadership of close friend and Pastor Moises Roman. His generosity knew no bounds, and he was always willing to lend a helping hand to family and strangers alike, as well as supporting various not-for-profit organizations close to his heart. Ernesto was an avid reader, a hardcore baseball and boxing fan, not to mention an excellent pool player. He enjoyed the outdoors, cultivating fruit trees in his native Puerto Rico. He loved music, especially the music of his youth and never said no to a hot cup of coffee. His shy disposition and humility belied the great wisdom and depth he imparted to those that were close to him and sought his advice, whether in business or life. Above all, his greatest pride and joy were his children, grandchildren and great-grandchildren, for whom his love was openly on display. Guests will be received at Branan Funeral Home, 809 N. Krome Avenue, Homestead, Florida from 2 to 4 p.m. on Sunday, April 3. A Celebration of Life will immediately follow, officiated by Ernesto’s son-in-law, Rev. Erik Kerr. Interment will be private. In lieu of flowers, donations can be made to the Alzheimer’s Association at https://www.alz.org/get-involved-now/donate or sent to P.O Box 96011, Washington DC, 20090-6011.

The family of Ernesto Luciano Jimenez created this Life Tributes page to make it easy to share your memories.

Send flowers to the Jimenez family.