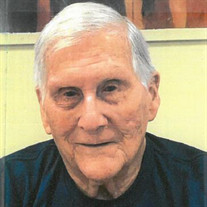 Erio Rubio born in Cuba on December 28th, 1927 and resident of Miami Florida, has passed away peacefully on January 15th, 2022. His loving daughters and family have dedicated this prayer in his name. Our Father, who art in heaven, hallowed be thy name; thy kingdom come; thy will be done; on earth as it is in heaven. Give us this day our daily bread. And forgive us our trespasses, as we forgive those who trespass against us. And lead us not into temptation; but deliver us from evil. For thine is the kingdom, the power and the glory, for ever and ever. Amen. He was the beloved husband of the late Encarnacion Hilda Rubio. He was the loving father of Ivis Santamarina, Selma Rubio Sotolongo, father in law to Eduardo Santamarina Jr, and Jose A Sotolongo. He was the dear brother of Eloina Rubio. He was the cherished grandfather of Ivette E Clero, Eduardo Santamina III, and his wife Massiel Santamarina. He was the adored great grandfather of Jordan Clero, E Lorenzo Santamarina, Roman Santamarina, and Dominic Santamarina. Papi made friends everywhere he went. He was truly a friend’s friend. Erio was a master storyteller, a consummate salesman with customer service skills that came naturally to him from his friendly and courteous nature. He was a true gentleman. He always harkened back to his country upbringing. He was proud of that, proud of his hometown in Cuba, Guatao and Punta Brava. He was proud of being Cuban. He was proud of his adopted country. He was a proud American. Papi was also a devoted Dodgers fan from their Brooklyn days. He loved baseball. Papi loved his casita in Hialeah. He was proud of his girls and with their choices and the path they chose. He loved us fiercely and beamed, truly beamed, when he saw us. How humbling. What a blessing from God. And how could we miss. We learned the very best lessons from him. Never preachy nor finger wagging, he was direct, honest and loving. He was wildly proud of his family, all of his family. He was a doting and gregarious grandfather and great grandfather. And he was a most devoted husband to our Mimi. She was his beloved. He adored her as much as she adored him. What a love story. After 14 months apart, they are reunited in Heaven. They are now gliding across a heavenly dance floor to a Glenn Miller Band song, making funnies, laughing and embracing. Papi made friends everywhere he went. He had many close and dear friends. Framily as we reference them today. He was widely loved and always well received by both friends and family. We miss him greatly, already. That’s just the kind of guy he was. He was affectionate and had a wicked sense of humor. His faith was unwavering and central to his life. A Christian, he was a Marist, a devout Catholic, a member of the Knights of Columbus and a member of Caballeros Católicos de Cuba. ¡Te queremos MUCHO, siempre, Papi! (Papi Erio as his grandchildren and great-grandchildren called him) All our love .. Rest In Eternal Peace ✝️💜 Ivis, Selma, Eddy, Jose, Ivette, Eddy, Massiel, Jorge, Jordan, Lorenzo, Roman, Dominic

Erio Rubio born in Cuba on December 28th, 1927 and resident of Miami Florida, has passed away peacefully on January 15th, 2022. His loving daughters and family have dedicated this prayer in his name. Our Father, who art in heaven, hallowed... View Obituary & Service Information

The family of Erio Rubio created this Life Tributes page to make it easy to share your memories.

Send flowers to the Rubio family.