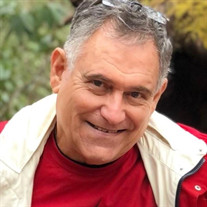 Eric Jacobo Dominguez of Tamarac, Florida, passed away on Sunday, April 17, 2022, at the age of 70 after valiantly battling for two months with complications from COVID-19. Eric was born on November 28, 1951, in Jatibonico (Camagüey) Cuba, and his parents then moved to Havana when he was five years old. He could go on for days telling stories of mischievous childhood adventures like the times when he and his friends would bike all over town while hanging on to cars or when he first learned to dance “casino” after a young girl called him “patón” as he didn’t know how to dance salsa. Soon thereafter he was dancing at every quinceañera party, many years later going on to choreograph his own two daughters’ coming of age soiree as well as his nieces.’ After High School, he went on to study electrical engineering graduating from Universidad Tecnológica de La Habana José Antonio Echeverría - Cujae. He met the love of his life, Maria “Mery” in Güines while both attended “la escuela al campo,” and they married on April 17, 1971. Their union lasted exactly fifty-one years, until his passing on their wedding anniversary. Eric was blessed with two daughters, Judith “Judy” and Leidys, whom he lovingly referred to as “mis dos ojos.” Always wanting his kids to excel at everything, he taught Judy to skate, fly a kite, swim and to throw a ball, while he pampered his “muñequita,” Leidys, with love and a fierce appreciation for all types of music including Chopin and other classical greats. He went on to teach his daughters how to drive and made sure each learned to drive a manual car from the onset. In 1984, Eric and Mery migrated with their daughters to the United States where he ultimately achieved the American Dream. He built a beautiful corner home with a pool as he always dreamt and went on to own several businesses. An adventurer at heart, Eric would take his family on many vacations throughout the East Coast, ensuring lasting memories were made – even if they couldn’t really experience New York City on foot as he felt it wasn’t safe. He was quite fond of a hot bowl of soup in China Town at whatever time of day though – just ask any of his cousins. Anyone who met him would know Judy went on to become a neuropsychologist and Leidys an attorney as he was proud of his daughters’ achievements and would herald it to everyone he met. While he only had two biological daughters, he gained two sons in Wilder Marzo and Freddy Hernandez. His heart filled with joy with each grandson born, Chris, Danny, Lucas, and Marcos, teaching them to swim, ride bikes, fly kites, fish, throw balls, and even drive cars, the same way he taught his daughters. His grandkids brought him joy, happiness, and a sense of pride. Eric was a true family man, always advocating for the family to remain together above all else. He also had a soft spot for animals, ultimately winning the pet wars with Mery who gave in to the family’s first pet dog, Negro. Years later, Phoebe, Riley, Barkley and Luna made him an official fur grandpa, and he relished every minute of it. Throughout his life, Eric enjoyed and was proficient at many sports including biking, swimming, diving, boxing, badminton, and skiing, which he mastered as an adult. He enjoyed yearly trips to Whiteface Mountain where he learned to ski and rejoiced in the powder heaven that are the blue and black slopes of Colorado and Lake Tahoe. No account of Eric would be complete without recalling memories in his beloved Triple Play, a forty-five feet Sea Ray convertible he enjoyed tremendously. In fact, he said his most treasured memory was being with his family onboard Triple Play. He took pride teaching each grandson to pilot the vessel and for over a decade each weekend you would find him in “el huequito” in Key Biscayne where so many fond memories and friendships were created. Many knew him being part of his “5,000 Facebook friends,” but those who met him personally knew he was a loyal and giving friend and neighbor. He had a hard time saying no to anyone and even when he was sick and tire from the side effects of his leukemia condition, he still lent a helping hand whether it was mowing someone’s lawn, doing handy work in their home or anything else they needed. He was also funny – very funny, in fact, and till his very last breath he found humor in life. Eric will be missed by his younger sister, Mayra “Mayrita” Escobar, his nieces, and nephews, Orania, Henry, Eric, Wendy, and Darlene, as well as his sister-in-law Emilia, Llamil, Richard, Ramiro, and all his cousins and friends. He is now reunited with his parents, Justo Dominguez and Blanca Rosa Abradelo and he’ll wait – impatiently as patience was not a virtue he possessed – to be reunited with his “núcleo” Mery, Judy and Leidys. Viewing and Funeral Services will be held on Thursday, April 21, 2022, from 6:00 PM to 11:00 PM at San Jose Palm Funeral Home Memorial Plan, 4850 Palm Avenue, Hialeah, Florida. Burial services will be held on Friday, April 22, 2022, at Caballero Rivero Dade South, 14200 SW 117th Avenue, Miami, Florida at 12:30 PM. In lieu of flowers, you may consider donating to the South Florida Chapter of the Leukemia and Lymphoma Society at www.lls.org/sofl

Eric Jacobo Dominguez of Tamarac, Florida, passed away on Sunday, April 17, 2022, at the age of 70 after valiantly battling for two months with complications from COVID-19. Eric was born on November 28, 1951, in Jatibonico (Camagüey) Cuba,... View Obituary & Service Information

The family of Eric Jacobo Dominguez created this Life Tributes page to make it easy to share your memories.

Eric Jacobo Dominguez of Tamarac, Florida, passed away on Sunday,...

Send flowers to the Dominguez family.