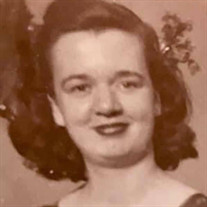 Dolores Morales Ramirez passed away peacefully on November 5TH in Miami, Florida. She was 90-years-old. Dolores was born in NYC and raised in Santiago, Cuba. She returned to NYC after graduating high school at the age of eighteen. She lived in the Bronx, working at Columbia Women’s Hospital as a nurse's aide. Dolores was an accomplished seamstress and secured employment as a dress and pattern maker at Wentworth Fashions in the garment district of Manhattan. She loved working with people and made friends easily wherever she went. In 1969 she moved her children to Elizabeth, NJ where they had extended family. Dolores worked as a visiting nurse’s aide in Union County and as a nurse's aide at St. Elizabeth’s Hospital Her patients loved her. She then earned a real estate license and went on to a successful career for many years with Planas Realty in Elizabeth, Dolores was an active member of the Elizabeth Lions Club and the Pro-Cuba Association. She was a staunch Republican and was overjoyed when President Ronald Reagan visited Elizabeth. Dolores loved traveling and did so extensively with cousins and close friends. Europe, South America, Israel, Mexico, the Caribbean and cities on the west coast of the United States were favorite destinations. She was a member of the YMCA in Union where she swam daily, a habit she continued into her late eighties in Miami. She loved celebrating traditional Cuban holidays and took pleasure exploring celebrations of other cultures. She even celebrated St. Patrick’s Day every year, watching the parade and cooking corned beef and cabbage. Dolores was affectionately known as Loly by her family and close friends. After her retirement and move to Miami in 1997, she became an active member of the South Florida Orchid Society. She was adept at growing these beautiful flowers. She loved the beach and made frequent visits whenever possible. Her love of animals was legendary. She had dogs, cats and birds throughout her life. She will be remembered with love by all who knew her as a beautiful, intelligent and fun-loving woman. Dolores is survived by a son, Paul Ramirez, a daughter, Myrna Bonin, and her only grandchild, Christopher Bonin, nieces, nephews and cousins. She was predeceased by her mother, Dolores; father, Ricardo; brother, Alberto and sister Carmen. Viewing will be held on November eighteenth at the Westchester Memorial Plan Funeral Home, 9800 SW 24TH Street Miami, Florida 33165 at 10;00 a.m. Her burial will be at Our Lady of Mercy Cemetery at 2 p.m. immediately following the service. In lieu of flowers, the family asks that donations be made to the Alzheimer’s Association, Southeast Florida Chapter.

Dolores Morales Ramirez passed away peacefully on November 5TH in Miami, Florida. She was 90-years-old. Dolores was born in NYC and raised in Santiago, Cuba. She returned to NYC after graduating high school at the age of eighteen. She lived... View Obituary & Service Information

The family of Dolores Morales Ramirez created this Life Tributes page to make it easy to share your memories.

Send flowers to the Ramirez family.