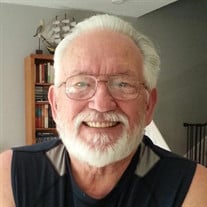 Dallas Wayne Montgomery was born May 17, 1938, to Clyde and Birda Fae (Blake) Montgomery in St. Louis, Missouri. He was preceded in death by his parents, sister Nancy, Brother Dale, Daughter Michelle Crites, Great Grandson Joshua Crites, Great Great Great Grandson Westen. After graduating from Soldan High School in 1956, he worked diligently and faithfully to support himself and his family. Music was his greatest passion. Among his many accomplishments, he served as Minister of Music in his local Baptist church. He was the leader of the award-winning Cadence Cloggers, a charismatic square dance instructor and caller, and Video and Media Minister of his beloved churches. As a photography enthusiast, important family memories (great and small) were chronicled. Dallas was diligent to bring his children up in the Christian faith. He humbly modeled one of the lessons closest to his heart: the importance of priorities. God must come first, followed by family. Dallas found great joy in bringing a smile to every face whether it was through the gift of a cross penny, a warm hug, or a smoothly delivered “dad joke”. If you’d call him on the phone, chances are he’d answer: “Kelly’s Pool Hall, 8 ball speaking!” He’d end every visit with “Don’t do anything I’d frown on but have fun.” Spreading the love of God was an ultimate priority. In 1999, Dallas moved his family from St. Charles, Missouri, to Miami, Florida. During this difficult transition, Dallas relied on God’s wisdom to guide his family. Dallas never claimed to be the perfect man, husband, father, or Christian; but he never ceased in his endeavor to be the best version of himself. Even in his final days, he continued to make visitors smile and lavished affection on his wife and family. Dallas heroically battled stage 4 lung cancer until he passed away peacefully and surrounded by loved ones on November 12th, 2021. His incredible legacy will be carried by his wife, Sue Montgomery; Children: Michael, Michelle (Crites), Amy (Szabo), Wendi (Dial), Robin (Heitz), Lisa (Cooper), Kimberly (Durham), Lacey (Caballero), and Nathan; Grandchildren: Austin, Kaitlyn, Brandi, Joshua, Jordan, Alyssa, Benjamin, Jacob, Brandon, Bailey, Taylor, Cody, Alexis, Kayla, Tyler, Noah, Micah, Joy, Johnathan, and Nicole; Great-grandchildren: Alexzandrea, Victoria, Charlene, Adyssen, Nathan, Landon, Tiara, Joshua, Clayton, Lilyana, Alivia, Brayden, Payton, Evelyn; and his great-great grandchildren: Killian, Adalynn, Andy, Westen, and two more on the way. Known affectionately by his friends and neighbors as the “Okie Dokie” man, his heart-warming presence will be carried on in the hearts of all he touched. He can still be heard saying, “God loves you and so do I”.

The family of Dallas Montgomery created this Life Tributes page to make it easy to share your memories.

Send flowers to the Montgomery family.