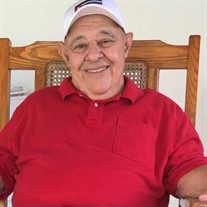 Clemente Adolfo Almeida was born in Sagua La Grande, Cuba on November 23, 1934 to parents Maria O’Farrill and Adolfo Almeida. He was one of six children, including siblings Concepcion, Miguel, Estanislao, Vicente, and Elvira “Loli”. Clemente emigrated to the United States in 1968 after surviving two years as a political prisoner in a labor camp under the Communist regime of Fidel Castro. He worked in Miami’s service industry prior to moving to Oregon when his sister Loli, brother-in-law Marino, and their seven children (Marino, Abelardo, Diego, Odalis, Maria, Adolfo, and Marlene) arrived from Cuba to the United States. During his time in Oregon, he enjoyed spending time with his family, picnicking at Blue Lake, and gathering at the Cuban-American Social Club. He even served as the first-ever Hispanic Union Leader at a national furniture company, one of his proudest accomplishments. Clemente married Ziomara Stincer and helped raise her two sons, Carlos and Jorge, whom he loved very much. The family relocated to Miami, where Clemente worked for Helene Weissner Designs, alongside his brother Miguel. Although Clemente and Ziomara eventually divorced, they maintained a beautiful friendship. In 1986, thanks in part to his best friend Emilio, Clemente met Juana at a birthday party. Within two years they were married with twin girls, Celia and Sandra. Four years later, another girl, Maria, came along to round out the Almeida family. Clemente is survived by his loving wife of nearly 35 years and their three daughters. His family will remember him as a loving father and husband who enjoyed making people laugh with his endless repertoire of jokes and anecdotes. He loved traveling, the outdoors, films, and his roosters; but most of all, his family. He leaves a lasting legacy of love, patience, and perseverance. The Almeida Family would like to express their sincere gratitude for the outpouring of love and support they've received during this difficult time. Condolences may be sent to the family: 216 NW 17th CT, Miami, FL 33125 A visitation is scheduled on Friday February 18th, 2022. from 6 pm to 11 pm at Memorial Plan Westchester Funeral Home. The following day on February 19th, we will be departing the funeral home at 12:30 PM to be at Miami Memorial Park Cemetery for the burial service beginning at 1 PM.

The family of Clemente Adolfo Almeida created this Life Tributes page to make it easy to share your memories.

Send flowers to the Almeida family.